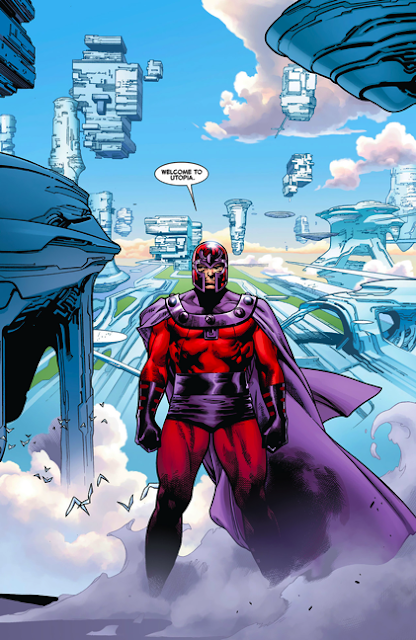 More thoughts on X-men to follow...
Posted by Jonathan O'Dwyer at 15:38 No comments:

What Grant Morrison achieves in a sense, is the clearest re-definition of Superman and his origin possible. Action Comics (#1-7) is a complex beast, as we would expect from the writer that sent Batman into insanity, wearing a purple costume, before back throughout time while being suspected of being dead, only to have him return through time in the guise of various ancestors (as well as sort of ‘cinematic genre’ characters ranging from Caveman to Pirate) to face a man who could be his father or Satan… or both. So yes, we should expect abstract narrative from Morrisson by now. However upon re visiting his re-imaging of Superman’s origin I’m reminded of how Morrison’s abstraction relies slightly on the structure of the drip feed of the American comic book. 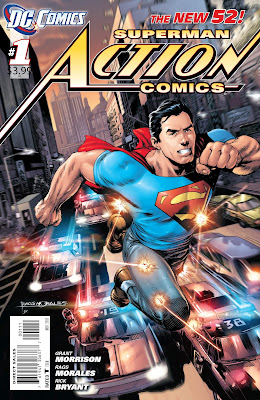 Morrison’s style in narrative structure is to introduce a panel that, in terms of chronology, should traditionally be shown later in the story or occasionally stands outside the flow of dialogue. When the reader has to wait a month between issues, some of these seemingly incidental panels, may be lost and some of Morrison’s success (or if you like failure), as a writer almost relies on that. The blurry confusion that Batman felt throughout Morrison’s run was also felt by the reader and the same technique has been employed here to re-tell Superman’s origin. Superman is aware subconsciously of his Kryptonian heritage in the same way we all have vague recollections of infancy and here Morrison is extending that sensation across his book. I have a feeling this is why many felt alienated from Final Crisis (alongside the magnitude of comic book character and timeline knowledge necessary), however I feel that book too benefits from being read in graphic novel form. It is clear, however, upon reading the first chapters of this run, that the clues are clearly presented all along, even if it is initially read as an aside from the lead narrative. In one instance Lex Luthor asks the authorities holding Superman, ‘hasn’t anyone bothered to look up?’ before his own manic mind moves on to the next thing, this clue of course referring to the impending attack on Metropolis as well as a little sci-fi nod to the U.S military and the seemingly on-going small minded idea of control over science and nature.
Morrison moves his story at a break neck speed, Action Comics is the right name for the book - especially so in the first two issues, and this adds to any of the reader’s disarray, it already feels as if we’ve perhaps had ten issues worth of ‘Action’ squeezed into seven months. All of this makes for an intense reading experience and the way in which Morrison throws Clark/Superman into battles with Lois/Luthor comes only with the implication of a scenario, rather than the explanation of it. I’m a fan of Morrison challenging the reader to interpret the work; this device also comes into play when blurring those lines for the reader. 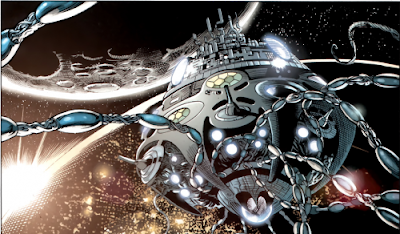 In terms of what this story arc actually does, well it presents us with every aspect of an origin story without ever quite falling into the trappings of such. The story starts and Superman already exists – a good move seeing as he’s the most recognisable super brand on the planet. We have characters set up, including two nemesis’ (three if you include Kryptonite), one of which is intrinsically linked to Superman’s life, history and culture (both Kryptonian and Earth) in the form of Brainiac who is known as the Internet on Earth and was the basis for the technology that guided Baby Kal-El to Earth. Clark Kent had already cleverly been linked to the Internet through reference to his blog as well as the notion of on-line news and I feel the context that falls into is fresh and current in comic book culture in the age of the ‘Snark’. Although the eventual strike of Brainiac, in the form of assembly line robots rising, is a little too close to Terminator mythos to be totally awe inspiring, its trashy pulp edge has the throw back quality of classic Sci-fi which in itself sits very well with Superman.  Braniac being an organism of intelligence (artificial or otherwise), makes him more fearsome in that he hasn’t a face, or a body, we have been shown a craft that looks and feels like the classic Braniac ship/mind/computer (complete with tentacles), but again it is only an implication in Morrison’s take (the Collector of Worlds character also carries trademark Brainiac features, although the reference to the technology being called Braniac on Krypton would suggest that Morrison may be redefining this character further in the months to come), and it starts to come over as an Invasion of the Body Snatchers for the 21st Century. 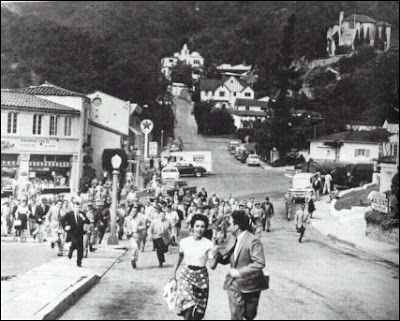 The notion of ‘retro’ being so in vogue at the moment is refreshed in Action Comics by the setting – we are given ‘retro’ story traits set in a contemporary ground rather than an emulation of the classic comics of the 30s and 40s. There’s a tent poling of comics culture present in this run to date and the scope of the project is commendable. In issue 5 we are given a story that runs parallel to the larger arc where the Superman of DC’s New 52 ‘present’ comes back to this point (roughly five years ago) and through the device of memory also travels back through time to Clark Kent’s childhood. I can see that the idea of time travel, parallel time lines and heritage are going to be key structural plot points going forward and with the knowledge that Morrison himself is interested in the wider Multiverse (as will be investigated in Multiversity which I’m sure will hit our shelves eventually), it will be interesting to see where all this will lead us. Either way the foundation of the New 52 Universe lies at least partially in Action Comics.

Posted by Jonathan O'Dwyer at 14:03 No comments:

A Lovely Piece of Web Pulp

Through reading a column on the ever graceful Robot 6, I (like many) have had American Barbarian by Tom Scioli drawn to my attention (no pun intended). My intrigue grew immediately and I checked out the preview Scioli has on his site, becoming absorbed in the rapid pace of the story and the Kirby-esque artwork I thought I'd re-post a few little details I found especially nice... 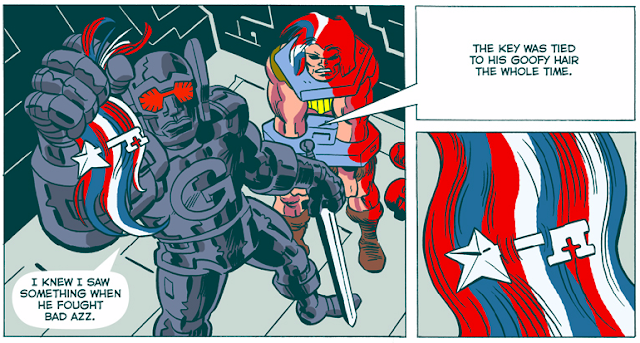 This comic is just about He-man enough to bring me back to my childhood roots - something I feel I've been indulging in of late, finally allowing my self to dip a toe into the dangerously vast and deep pool of manga (but not too far) and realising that has some deep roots for me - which is something that JCM touches on in his much more comprehensive take on the book. This has been a light, punchy relief from the convoluted world of Death Note that I have been putting myself through recently (like I say only just allowing myself into that territory). I recommend a look and a buy, I myself will have a look at Godland next, as I've missed that little boat. 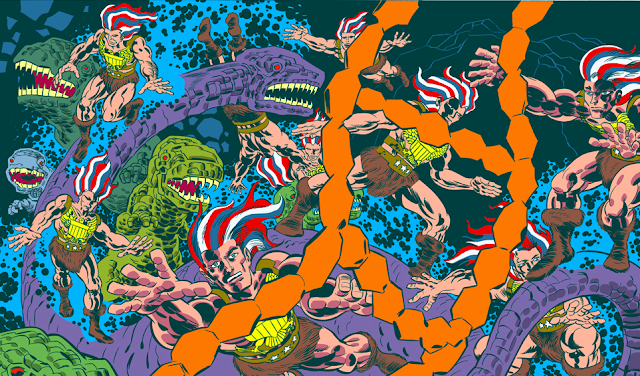 Posted by Jonathan O'Dwyer at 04:38 No comments: